Do You Know How to Show Versus Tell?

Since I don't write fiction, I might not be the best to describe the Show, don't Tell principle of writing. It is, nevertheless, an important writing skill to hone. It is as important to hone as learning to write in active tense rather than passive.

Just 12 years ago, or so I was tutoring a high school student. I was teaching him based on old rules. I taught him to embellish his sentences with flowery adjectives. I didn't know doing so was now passe. No, we are not to say she donned a very lovely dress--very and words that end in ly are now to be axed.

The point is, we need to keep up with new writing rules.

So back to the show versus tell example. The manuscript I'd looked at for a woman had deplorable descriptions that went like this:

Bob picked up his toothbrush, squeezed toothpaste onto it and began to brush his teeth. Then he turned off the tap, the lights, and made his way to his room. He pulled the blanket off the bed and climbed in. He was troubled because his wife was so belligerent to him and had cheated on him.

I didn't see the entire manuscript so am unsure the importance of this detail, but it struck me as too much detail. It also struck me as telling not showing. It's like she wrote a report.

I'm not sure the sample showed anything about Bob's character or appearance or that it was important to the story to move the story along. I mean, don't we all do this at night to get ready for bed? Isn't it a little insulting to the reader to give so many obvious details? Could she not have said: Bob got ready for bed?

Here is a quick example of what she might have written in a more showing format:

Bob gripped his toothbrush tightly, brushing his teeth rapidly before making his way to the bed, "Why did she have to cheat on me? What do I do now? I can't stay at my brother's forever."

The single bed seemed small, the room dark and lonely. The thin flannel blanket would be Bob's only solace.

Again, I'm not a fiction writer so not sure I nailed it, but the second format explains the same series of events as the first, but in a way that unfolds the story.

What do you think? Are you willing to practice showing over telling?

Are you Open to Learning?

I just reviewed a manuscript of a woman who is a wannabe writer. I know using that term wannabe sounds a little arrogant. But we've all been there before. We pour our heart into something and by the end we think it's worthy of publishing. But it may not be. We want to be a good writer, but we aren't there yet.

We sometimes become deluded by our work not because it's great and publish-worthy, but because we've spent so much time on it. We feel we've poured every ounce of ourselves into the project and so now we're done.

Pouring ourselves into a project can lead to another problem. We might become overly attached to it. Our writing becomes our child, so to speak. No one dares insult our child.

Having spent so many unpaid hours on a manuscript, by the end, most of us just want to reap from it. We want it accepted by an editor or publisher or to self-publish it on Amazon, and we want to start earning royalties from it.

The Value of Critiques

But to be a writer of something that sells, we need to be prepared to hear critiques, even if it's our own. What I mean by our own is we might let a manuscript sit for months or years and when we re-read it, see it's a mess. We give ourselves a reality check

The woman I mentioned above seems to think her three manuscripts are ready for publishing. It's obvious through the short encounters I've had with her that she isn't open to critique. She's defensive, as so many of us writers are.

To become a good writer really requires ongoing learning. We can always learn from other writers--not just from their books, but from their input in online support groups or local meetups. There is also plenty of good material online and in the form of ebooks that will help us improve our writing.

My web content articles are always edited/critiqued before I can offer them for sale. I've had to develop tough skin. Sometimes the editors are off base. Sometimes an editor points out stylistic changes which aren't necessary, it's just what they individually prefer. In those cases, I get frustrated.

Where my eBooks are concerned, I'm a little more timid. I did pay $500 once to have a critique. In the end, it was valuable, but at the time it was a massacre. I scrapped the entire manuscript and started over.

So are you prepared to take feedback on your writing? Or are you convinced you are stellar enough?

Will you dedicate yourself to ongoing learning so you can improve in your writing?

Do you have some role models in your life?

Every now and then you meet someone who inspires you.  It may be their smile, their friendly personality, their demeanor, their thoughtfulness, their spiritual faith...

Role models can be picked up through books too. It's amazing how certain authors have impacted my life personally. I like to follow them on social media to stay inspired. I like to buy more of their books as they come out.

We are always drawn to others who have something we'd like to emulate or who impact us personally in positive ways.

Social networking and the Internet are great ways to pick up mentors or role models that can come right into your home virtually at any time.

It's good to keep a few good models in our relationship satchel, even if we only admire them from afar, through the pages of a book, or through their blog posts.  When we get side-tracked they will inspire us.  When we are lost, visiting them in person or virtually helps us feel "found" again.

Popping in to write about a thought I wanted to share.

When I had a book critique done, my writer/editor doing the critique criticized me for having dictionary definitions in my work. She said it was the sign of an immature writing. I took them out.

Whether or not you want to add dictionary definitions is up to you, but at the very least--please put quotations around direct quotes and footnote or give credit as to where you got it!

The same goes for Bible verses--apparently today's publishers prefer you paraphrase the meaning of the Bible verse rather than directly quote it. If you do quote it word for word, please also do the proper quotation marks and add the reference.
at January 24, 2018 No comments:

Email ThisBlogThis!Share to TwitterShare to FacebookShare to Pinterest
Labels: references and quotes

Writing is the easy part. You sit at a computer or pull out your journal and spew your thoughts. But if you want to share or publish your writing, editing is necessary. Blog posts can get away with a little less work, but articles take thought.

When I edit something I've thrown together, I first try to decide where I can go with it. It has to serve a purpose. It has to ask and answer a question.

Then there has to be flow. The sequence has to make sense.

That being said, I've gone back over some things I've written and published and much later see it could have flowed better. In most cases, the piece could have less words.

Cutting unnecessary words is an important edit. When I write eBooks, not only do I cut the unnecessary words I notice, I go to lists I've saved that professional editors say to cut (you can find lists online). I do a word search on various words or phrases and cut down drastically.

Nevertheless, time is needed between edits even if it is simply minutes. I will edit an article, leave it to work on another, and return to it later. I do this on and off until I can read an article through without making a change. Then I know it's ready.

Of course, the perfectionist in most writers sees more to change. When this becomes problematic, I just call it quits. I say it's good enough, and I send it to the editors.
at January 18, 2018 No comments:

Who Am I? What do I Charge?

Just wanted to share a bit more about myself and my services:

See My Writing Services Page
at January 17, 2018 No comments:

How Much Time to Leave an Article Draft?

I read a question asking how long to let a draft article sit before re-editing it. I don't think there is a hard and fast rule, but here is a general impression from my own work experience.

If I'm writing an article to sell, it is usually 500 to 1,200 words. So it is relatively short. But I may have reworked it several times.

Often, the temptation is to just get it done and up on the Constant-Content site where I sell many articles I write. Taking less time to edit would also mean I make more money per hour which is always a challenge.

But more often than not, I have found it's better to let the article sit overnight or at least until the end of the day before re-editing it. Doing so makes it much easier to spot obvious changes.

Sometimes, I let drafts sit for weeks or months. When editing an article, I might rewrite it or add to it so much it becomes obvious I should break it into two or more articles. When I break it up, I can earn more if they all sell.

There is no time limit for letting an article simmer except to say it is better to let it sit a few hours or a day or two.

That being said, most of my blog posts are published right after crafting them.
at January 13, 2018 No comments:

Finding Words for Your Story

I usually write non-fiction. In non-fiction, especially articles for web content, we need to write concisely. That means, we don'... 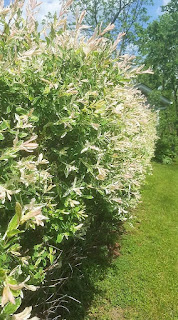 Visit me at www.RosalieGarde.com
I write for myself but also for others as a ghostwriter and under a pen name. If you search online for my sold articles you need to search with my pen name not Rosalie Garde.
This blog is a past-time. I know there are grammatical mistakes here. I simply cannot afford to spend unpaid time re-reading and correcting blog posts, so if you note poor writing or errors, please offer some grace. Take the good and spit out the rest!